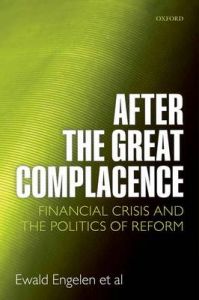 After the Great Complacence: Financial Crisis and the Politics of Reform

Read less
Review:
In After the Great Complacence, Engelen et al. have powerfully captured the reinvention of contemporary financial institutions associated with the emergence of more complex and risky finance...Read more
In After the Great Complacence, Engelen et al. have powerfully captured the reinvention of contemporary financial institutions associated with the emergence of more complex and risky finance leading up to the 2008 financial crisis. Dean Curran, The British Sociological Association Among the growing body of scholarship on the global financial crisis, After the Great Complacence stands out for the sophistication and ingenuity of its insights. This engaging book produced by a team of researchers associated with the University of Manchesters Centre for Research on Socio-Cultural Change presents an impressive interdisciplinary analysis of the origins of the crisis and the prospects of finance reform. Chris F Wright, Work Employment and Society [A]n interesting and thought-provoking read for academics, practitioners and interested lay readers alike. Liam Stanley, Political Studies Review Masterly ... should be read by every policy-maker currently engaged in the rhetoric of "rebalancing". Paul Mason, The Guardian A very important book ... an indispensible tool to counter the propaganda of the City and its friends in politics and the media. Ian Sinclair, Tribune It's excellent and important. Absolutely essential reading for anyone wanting to understand how Britain's financial sector got out of control ... a landmark in this field. Nick Shaxson, author of the Treasure Island There have been many books about the financial crisis but very few as original and incisive as this one. This is a book which really ought to be read not only by academics but also by industry representatives and policy makers in order to make sure that the kind of hubris displayed in the early 2000s, born out of a curious mixture of elite miscalculation and misbegotten premises, never again becomes an article of faith. Nigel Thrift, Vice-Chancellor, University of Warwick With the post-crisis financial reform process at an impasse the book looks at the historical causes of the crisis. Its focus on elite power control of central banking and regulation is a refreshing alternative to macro-economic narratives. This is essential and disturbing reading for anybody concerned about the relationship between financial power and democracy. Paul Mason, Economics Editor, BBC Newsnight By taking a sideways swipe at the idea of the period before the financial crisis being the "great moderation" this book provides a convincing narrative for this being the "great complacence" instead. It suggests that this was a period of unprecedented hubris on the part of the political and economic elites, and that the resulting crisis was not an accident, not a disaster, not a catastrophe, nor a fiasco, but a genuine political debacle. The book argues that elites failed to appreciate the financial system as a bricolage of excess, disconnects, anomalies, and contradictions, with the result that this ramshackle assemblage collapsed around them and us with devastating consequences. Angry and compelling, this book demands to be read as a clear-headed alternative account of the run up to this critical period and its aftermath. Grahame F. Thompson, Copenhagen Business School This book offers a brilliant discussion of the relationship between finance and politics and it should be on the reading list of any economist. Daniela Gabor, Economic Issues
Read less

Money, the Financial System and...

Credit Reporting Systems and the...