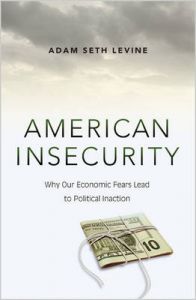 American Insecurity: Why Our Economic Fears Lead to Political Inaction

Pathways to Fiscal Reform in the...