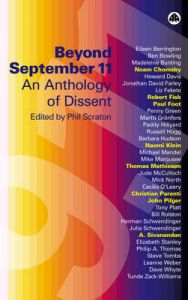 Beyond September 11: An Anthology of Dissent

Mental Health in the War on...

The Age of Terror: America and...