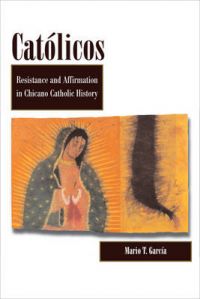 Chicano Catholicism--both as a popular religion and a foundation for community organizing--has, over the past century, inspired Chicano resistance to external forces of oppression and discrimination...Read more

Chicano Catholicism--both as a popular religion and a foundation for community organizing--has, over the past century, inspired Chicano resistance to external forces of oppression and discrimination including from other non-Mexican Catholics and even the institutionalized church. Chicano Catholics have also used their faith to assert their particular identity and establish a kind of cultural citizenship.

Based exclusively on original research and sources, Mario T. Garcia here offers the first major historical study to explore the various dimensions of the role of Catholicism in Chicano history in the twentieth century. This is also one of the first significant studies in the still limited field of Chicano religious history.

Topics range from how early Chicano Catholic intellectuals and civil rights leaders were influenced by Catholic Social Doctrine, to the role that popular religion has played in the lives of ordinary men and women in both rural and urban areas. Garcia also examines faith-based Chicano community movements like Catolicos Por La Raza in the 1960s and the Sanctuary movement in Los Angeles in the 1980s.

While Latino/a history and culture has been, for the most part, inextricably linked with the tenets and practices of Catholicism, there has been very little written, until recently, about Chicano Catholic history. Garcia helps to fill that void and explore the impact--both positive and negative--that the Catholic experience has had on the Chicano community.
Read less

John XXIII: Pope of the Century