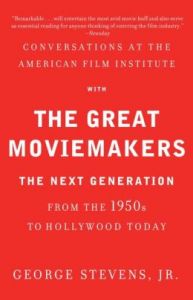 Conversations at the American Film Institute with the Great Moviemakers

ISBN: 9780307474988    Publisher: Random House Year of publishing: 2014     Format:  Paperback Language: English
A companion volume to George Stevens, Jr.s, much admired book of American Film Institute seminars with the great pioneering moviemakers (Invaluable"Martin Scorsese).Those represented here"directors, producers,...Read more
A companion volume to George Stevens, Jr.s, much admired book of American Film Institute seminars with the great pioneering moviemakers (Invaluable"Martin Scorsese).Those represented here"directors, producers, writers, actors, cameramen, composers, editors"are men and women working in pictures, beginning in 1950, when the studio system was collapsing and people could no longer depend on, or were bound by, the structure of studio life to make movies. Here also are those who began to work long after the studio days were over"Robert Altman, David Lynch, Steven Spielberg, among them"who talk about how they came to make movies on their own. Some"like Peter Bogdanovich, Nora Ephron, Sydney Pollack, FranÃ§ois Truffaut"talk about how they were influenced by the iconic pictures of the great pioneer filmmakers. Others talk about how they set out to forge their own paths"John Sayles, Roger Corman, George Lucas, et al. In this series of conversations held at the American Film Institute, all aspects of their work are discussed. Here is Arthur Penn, who began in the early 1950s in New York with live TV, directing people like Kim Stanley and such live shows as Playhouse 90, and on Broadway, directing Two for the Seesaw and The Miracle Worker, before going on to Hollywood and directing Mickey One and Bonnie and Clyde, among other pictures, talking about working within the system. (When we finished Bonnie and Clyde, says Penn, the film was characterized rather elegantly by one of the leading Warner executives as a piece of shit . . . It wasnt until the picture had an identity and a life of its own that the studio acknowledged it was a legitimate child of the Warner Bros. operation.) Here in conversation is Sidney Poitier, who grew up on an island without paved roads, stores, or telephones, and who was later taught English without a Caribbean accent by a Jewish waiter, talking about working as a janitor at the American Negro Theater in exchange for acting lessons and about Hollywood: It never really had much of a conscience . . . This town never was infected by that kind of goodness. Here, too, is Meryl Streep, Americas premier actress, who began her career in Julia in 1977, and thirty odd years later, at sixty, was staring in The Iron Lady, defying all the rules about term limits and a filmmaking climate tyrannized by the male adolescent demographic . . . Streep on making her first picture, and how Jane Fonda took her under her wing (That little line on the floor, Fonda warned Streep, dont look at it, thats where your toes are supposed to be. And thats how youll be in the movie. If theyre not there, you wont be in the movie). Streep on the characters she chooses to play: I like to defend characters that would otherwise be misconstrued or misunderstood. The Next Generation is a fascinating revelation of the art of making pictures.
Read less
About the author: Jr. Stevens
Jr....
Read less

Other books by Jr. Stevens

Conversations at the American...