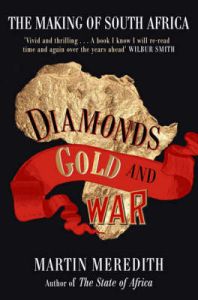 But in 1871, prospectors exploring a remote stretch of sun-scorched scrubland chanced upon the world's richest deposits of diamonds. Fifteen years later, an itinerant digger stumbled across the rocky outcrop of a gold-bearing reef on a highveld ridge known as the Witwatersrand. Beneath lay the richest deposits of gold ever discovered. "What followed was a titanic struggle between the British and the Boers for control of the region. It culminated in the costliest, bloodiest, and most humiliating war that Britain had waged in nearly a century, and left the Boer republics devastated. The Anglo-Boer War played as important a part in the making of modern South Africa as did the Civil War in the development of the United States."

"Two men personified this struggle: Cecil Rhodes, the son of an English country parson who used his huge fortunes from diamonds and gold to promote the expansion of the British empire as well as his own business interests; and Paul Kruger, the Boer leader and landowner, whose only education was the Bible, who believed the earth was flat, but who defied Britain's prime ministers and generals for nearly a quarter of a century." "In this history of the turbulent years leading up to the founding of the modern state of South Africa in 1910, Martin Meredith portrays the great wealth and raw power, the deceit, corruption, and racism that lay behind Britain's empire-building in southern Africa."
Read less

Other books by Martin Meredith

In an Antique Land (English)...

The Decline And Fall Of The...