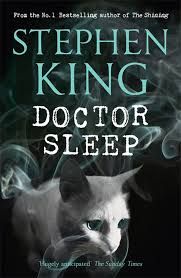 Hotel where he spent one horrific childhood year, Dan has been drifting for decades, desperate to shed his father's legacy of despair, alcoholism, and violence. Finally, he settles in a New Hampshire town, an AA community that sustains him and a job at a nursing home where his remnant 'shining' power provides the crucial final comfort to the dying. Aided by a prescient cat, he becomes 'Doctor Sleep. 'Then Dan meets the evanescent Abra Stone, and it is her spectacular gift, the brightest shining ever seen, that reignites Dan's own demons and summons him to

a battle for Abra's soul and survival . . .
Read less
Review:
King's own supplies of creative steam show little sign of being depleted. The Sunday Times King is a very remarkable and singular writer. He can catch dialogue, throw away an observation or mint a...Read more
King's own supplies of creative steam show little sign of being depleted. The Sunday Times King is a very remarkable and singular writer. He can catch dialogue, throw away an observation or mint a simile, sometimes, brilliantly ... Storytelling is everything - and by golly does he know how to carry the reader. Observer DOCTOR SLEEP is King expertly returning to the milieu of his most beloved novels, combining not just elements from the original THE SHINING but themes and imagery familiar from King's books, including CARRIE, SALEM'S LOT, FIRESTARTER and IT. It also has a structure King has often utilised before, with a group of essentially good people having to band against a gang of baddies but within this structure King works masterful variations, showing just with a brilliant storyteller he is. When King is on form, as he is in DOCTOR SLEEP, he has no rivals for sheer page-turning suspense. It is as addictive as anything he has written: a triumph from the world's finest horror novelist. Sunday Express It's a gripping, powerful novel, all the more so for being patently heartfelt. Financial Times DOCTOR SLEEP is a warm, entertaining novel by a man who is no longer the prisoner of his demons, but knows where to find them when he needs to call on them. Daily Telegraph Thirty-six years on from his horror classic, THE SHINING, Stephen King's sequel shows he still has plenty of creative steam. The Sunday Times King has written a sequel, the tale of what happened to little Danny when he grew up. Need one say more? It cannot fail ... the best thing to emerge from King's glittering, warped imagination is of mundane, small-town America corrupted by hidden forces ... you cannot but respect his ruthless expertise as a storyteller ... even those of us who would never freely pick up a Stephen King must genuflect to a master. The Times Stephen King's frightscapes are among the most incredible in literature, yet one believes in them unquestioningly. Spectator Terrifying and, as always, brilliantly-crafted tale, you won't be left wanting. But you may be left scared. Sun A magnificent sequel to one of the finest horror yarns written ... Brilliant. Daily Express Highly anticipated sequel to his bestselling 1977 novel THE SHINING. Daily Express Saturday Mag Hopeful and hugely humane. -- John Connolly Irish Times DOCTOR SLEEP has a tightness, an economy, after some of the lengthier novels of recent years, but also a lightness of touch. It reads less like a horror novel than a thriller and ends on a scene of intimate and intense human contact, a gift of consolation at the moment of death. -- John Connolly Irish Times King is too skilled a storyteller for DOCTOR SLEEP to be anything other than unputdownable. Mail On Sunday Both an excellent sequel to THE SHINING and a strong novel in its own right, this is one of King's best books in the last decade. SciFi Bulletin Suspenseful, thrilling and packed with twists ... an incredibly sincere piece of writing. Time Out It still grips, just differently than the original Shortlist King still remains the daddy of them all Metro The novel's deepest shiverings depend on no made-up devils. Guardian For the truth is, there are few writers who have such a way with character (and that character delivered through authorial peeks into thought and feeling, is so important in his books) ... Once his stories get their hooks into you, they're impossible to put down ... The denouement of the novel takes place in autumn, and that's no coincidence. You can practically smell the leaf piles burning, their fragrant smoke mixed with that of funeral pyres. Sfx.co.uk King [is] a genius at transforming the ordinary into the utterly horrific. Evening Standard This is the master on top form, drawing his readers in with his amazing storytelling power - first with the tension, then with the richness and details of the scene-setting and characterisation. Daily Mail Book of the Week: King finds a mode of the supernatural that has a melancholic beauty while avoiding spiritualist blather Guardian [King] writes people and communities with searing acuity, and often touching compassion, coupled with tough and authentic understanding. The difference is, he also steps back, or sideways, through the gaps to hook out the slithery things and the creeping, gut-churning things at the corner of our vision. British Fantasy Society Review
Read less