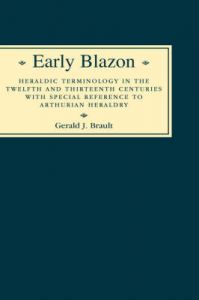 Early Blazon: Heraldic Terminlogy in the Twelfth and Thirteenth Centuries with Special Reference to Arthurian Heraldry

Other books by Gerard J. Brault

Song of Roland: An Analytical...

The Bigod Earls of Norfolk in...

Sleepwalking into a New World:...

The Illustrated Chronicles of...