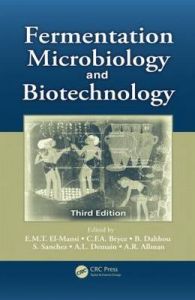 ISBN: 9781439855799    Publisher: Taylor & Francis Inc Year of publishing: 2012     Format:  Hardcover No of Pages: 555        Language: English
Fermentation Microbiology and Biotechnology, Third Edition explores and illustrates the diverse array of metabolic pathways employed for the production of primary and secondary metabolites as well as biopharmaceuticals....Read more
Fermentation Microbiology and Biotechnology, Third Edition explores and illustrates the diverse array of metabolic pathways employed for the production of primary and secondary metabolites as well as biopharmaceuticals. This updated and expanded edition addresses the whole spectrum of fermentation biotechnology, from fermentation kinetics and dynamics to protein and co-factor engineering. The third edition builds upon the fine pedigree of its earlier predecessors and extends the spectrum of the book to reflect the multidisciplinary and buoyant nature of this subject area. To that end, the book contains four new chapters: Functional Genomics Solid-State Fermentations Applications of Metabolomics to Microbial Cell Factories Current Trends in Culturing Complex Plant Tissues for the Production of Metabolites and Elite Genotypes Organized and written in a concise manner, the book's accessibility is enhanced by the inclusion of definition boxes in the margins explaining any new concept or specific term. The text also contains a significant number of case studies that illustrate current trends and their applications in the field.
With contributions from a global group of eminent academics and industry experts, this book is certain to pave the way for new innovations in the exploitation of microorganisms for the benefit of mankind.
Read less
About the author: E. M. T. El-Mansi , C. F. A. Bryce , Arnold L. Demain , A.R. Allman
Dr. Mansi El-Mansi was the first to postulate and unravel the role of HS-CoA in the partition of carbon flux among enzymes of central metabolism during... Read more
Dr. Mansi El-Mansi was the first to postulate and unravel the role of HS-CoA in the partition of carbon flux among enzymes of central metabolism during growth of Escherichia coli on acetate. He was also the first to provide evidence supporting Dan Kosahland's theory of "ultrasensitivity". His research activities, which span the best part of 30 years, yielded an extensive list of publications of which four are single-author publications in peer-reviewed journals. He is currently a professor of biotechnology at Sharda University, Greater Noida, India. Dr. Charlie Bryce has held posts as Head of the School of Life Sciences and Dean of the Faculty of Sciences for over 20 years at Edinburgh Napier University. For the last three years, he focused on International Development for the Faculty of Health, Life and Social Sciences and, more recently extended this to developing international research and technology transfer links for all areas of the university. He now acts as an independent international consultant for program development, learning support material development including e-learning, continuing professional development, and quality assessment and audit at the departmental and institutional level. Dr. Arnold Demain has published extensively on enzyme fermentations, mutational biosynthesis, bioconversions, and metabolic regulation of primary and secondary metabolism. His success is evident in a long list of publications (over 530), 14 books of which he is co-editor or co-author, and 21 U.S. patents. His ability to "hybridize" basic studies and industrial applications was recognized by his election to the presidency of the Society for Industrial Microbiology in 1990, membership in the National Academy of Sciences in 1994, the Mexican Academy of Sciences in 1997, and in the Hungarian Academy of Science in 2002. In recognition of his outstanding contribution to our current understanding in fermentation microbiology and biotechnology, he has been awarded honorary doctorates from a number of universities. Dr. Anthony (Tony) R. Allman began his career at Glaxo, where he spent six years carrying out research into the development of subunit bacterial vaccines. During that time, he became acquainted with fermenters and their applications. Subsequently, he acted as a specialist in this area for the U.K. agent of a major European fermenter manufacturer. When Infors U.K. was established in 1987, Tony joined the new company as Product Manager (later Technical Director) and in 2002, he became Fermentation Product Manager for the Swiss parent company, Infors AG. His work involves providing technical support, training, and application expertise in-house and throughout the world. Dr. Boutaib Dahhou addresses various issues of supervision, control, and modeling of linear and nonlinear systems. Currently, the detection and isolation of faults in the dynamic of nonlinear systems is of particular interest. Dr. Dahhou developed new algorithms on the basis of the adaptive observers that made possible the instantaneous detection of any fault. The isolation of these faults demand much time because of the procedure of parameter adaptation. To resolve this problem, he is currently developing a new approach of isolation that is based on the parameter intervals. Dr. Dahhou has successfully supervised 18 PhD students and published more than 72 articles in international journals and 130 communications in international congresses. Dr. Sergio Sanchez has published extensively as a professor of industrial microbiology. He has made important discoveries in several areas, including research on the interrelation between the role of glutathione and the amino acid transport systems and the production of penicillin in Penicillium chrysogenum. He also explored the regulatory relationships between primary and secondary metabolism in Streptomyces peucetius var. caesius; he was the first to show that in addition to Glk, an adjacent gene (sco2127) participates in the process of carbon catabolite repression in this organism. Currently, he is an editor on the editorial board of Applied Microbiology and Biotechnology and the Editor-in-Chief of BioTecnologia, an international journal published by the Mexican Society for Biotechnology and Bioengineering.
Read less

Current and Emerging Trends in...