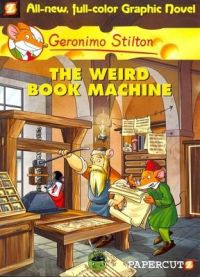 
Geronimo Stilton is a popular childrenâ€™s fiction series which features the various adventures of Geronimo Stilton, who is a talking mouse. Mr. Stilton resides in New Mouse City which is located on Mouse Island. Geronimo a good-natured mouse and lives with his younger sister, Thea Stilton, his cousin Trap Stilton, and Benjamin Stilton, a nine-year old nephew of Geronimo.


This time around the Pirate Cats, led by Tersilla of CatatoniaÂ are back on a mischievous expedition.They have traveled back in time to steal Johannes Gutenbergâ€™s original printing press. Geronimo travels with his friends to the city of Mainz, Germany in the year 1455. Will Geronimo be able to prevent this from happening and stop the pirate cats? This is another fun book of the series complete with humor and wit. The book has beautiful graphical illustrations to make it a fun read for children. This book will appeal to children aged between 8 and 12 years.


Elisabetta Dami, an Italian writer, is the creator of the Geronimo Stilton series.Â Other books in the series include Get into Gear, Stilton!, Mouse in Space!, The Dragon Prophecy: The Fourth Adventure in the Kingdom of Fantasy, Rumble in the Jungle, The Stone of Fire, and The Giant Diamond Robbery.


Dami started off in the writing world as a proofreader at her familyâ€™s publishing company. She created the idea of a rodent who reluctantly goes off on many adventures around the world, mostly as a result of the machinations of his family and friends. The Geronimo Stilton series has sold more than 65 million books.
Read less

Other books by Geronimo Stilton

Attack of the Dragons (Geronimo...

Geronimo Stilton the Hunt for...