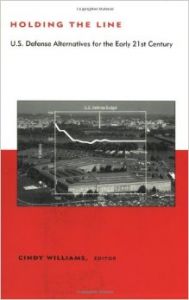 Holding the Line: Us Defense Alternatives for the 21st Century (English) (Paperback)