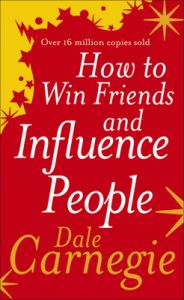 How to Win Friends and Influence People

How To Win Friends And Influence People is divided into four parts. The first one includes three fundamental techniques on how to handle people. The author says that it is important to give sincere appreciation, and to avoid criticism as it makes people defensive. The second portion explains six ways to make people like a person. Readers are encouraged to show interest in other people, to remember names, to smile often, and to become good listeners. In addition to this, the book illustrates how to make someone feel important.

This is followed by twelve techniques on how to win people by changing their way of thinking. Carnegie says that it is important to admit one’s mistakes, and to show respect to other people’s viewpoints. Dramatizing ideas may help grab other people’s attention. The last section talks about changing people without offending them. The author provides tip on how to indirectly correct someone’s mistakes, and to avoid giving direct orders. He adds that it is also important to provide encouragement, and give the other person a chance to save face.
This book is packed with wisdom, all of which have stood the test of time. For over sixty years, the author’s style of writing has captivated readers all over the world. How To Win Friends And Influence People has sold 15 million copies globally.


A bible for anyone who faces problem while dealing with people. Full of practical advice and techniques.

Other books by Dale Carnegie

How To Stop Worrying And Start...

How to Develop Self-Confidence...

The Leader in You (English)...

How to win friends and influence...

How to Win Friends and Influence...

How To Win Friends & Influence...