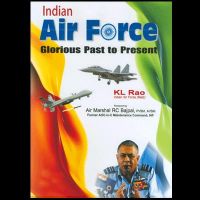 Other books by K.L. Rao

The Rise of Indian Military...

Air Force Roles and Missions: A...

by Warren A Trest