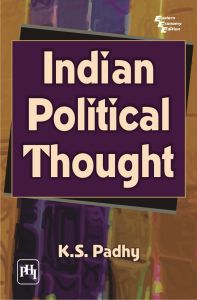 ISBN: 9788120343054    Publisher: PHI LEARNING PVT. LTD. Year of publishing: 2011     Format:  Paperback No of Pages: 392        Language: English
Intended as a text for the undergraduate and postgraduate students of Political Science, this compact book brings to fore the political thought of various Indian thinkers over the decades.

Intended as a text for the undergraduate and postgraduate students of Political Science, this compact book brings to fore the political thought of various Indian thinkers over the decades.

The book begins with a detailed discussion on the political thought of Manu, the lawgiver, whose classification of the different castes and their duties is highlighted. Then it goes on to give a comprehensive account of such thinkers as Kautilya, the author of Arthashastra, who talks about the four stages of life and the duties of the King; Raja Ram Mohan Roy, the religious reformer; Swami Dayananda Saraswati, the Hindu reformer and advocate of the Vedas, who criticized untouchability and discrimination of women and who set up the Arya Samaj. Besides, the book deals in detail with such thinkers as Swami Vivekananda, Bal Gangadhar Tilak, Gopal Krishna Gokhale, and Shri Aurobindo.

Further, the book analyzes the political thought of the great Indian leaders such as Mahatma Gandhi, the Father of the Nation, whose ideas of Satyagraha, Ahimsa (Non-Violence), Swadeshi, and Swaraj are too well known and who galvanized a whole nation in achieving Independence; Jawaharlal Nehru, the Architect of Modern India and the first Indian Prime Minister whose ideas on socialism, democracy, planning and foreign policy have guided the nation; the indefatigable JP (Jaya Prakash Narayan), the pioneer of socialist movement; and Bhimrao Ambedkar, the Architect of the Indian Constitution -- the great social reformer who championed the cause of the scheduled castes, the underprivileged and the marginalized sections of the society.

Finally, the book makes an analysis of ideas of other thinkers, namely, Sir Sayyed Ahmed Khan, a great advocate of communal harmony, Muhammad Ali Jinnah, an advocate of theocracy; Lala Lajpat Rai, the Lion of Punjab and the propounder of Swaraj; Ram Manohar Lohia, a powerful exponent of socialism; Vinayak Damodar Savarkar, an opponent of absolute non-violence, and Mahatma Jyotirao Govindrao Phule, a great social reformer.

This text, which compresses the political thought of the great Indian thinkers and leaders, will benefit not only undergraduate and postgraduate students but also aspirants of civil services and any one who wishes to delve deeper into the subject.
Read less

Professor Padhy has authored 15 books on various aspects of life, such as corruption, reservation, media, industrial policy and rural and urban politics. He has published several research papers in national and international journals of repute. He has also guided more than 42 M.Phil. and Ph.D. scholars.
Read less