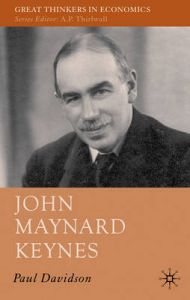 Other books by Paul Davidson

International Money and the Real...

After the Great Complacence:...

The Economics of Microfinance...