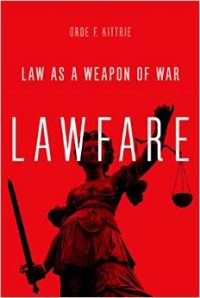 Lawfare: Law as a Weapon of War

Double Talk: On Weapons of Mass...