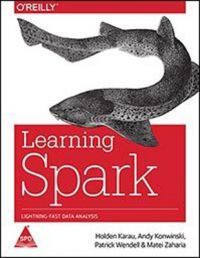 Written by the developers of Spark, this book will have data scientists and engineers up and running in no time. You'll learn how to express parallel jobs with just a few lines of code, and cover applications from simple batch jobs to stream processing and machine learning.
About the Authors
Holden Karau is a software development engineer at Databricks and is active in open source. She is the author of an earlier Spark book. Prior to Databricks she worked on a variety of search and classification problems at Google, Foursquare, and Amazon. She graduated from the University of Waterloo with a Bachelors of Mathematics in Computer Science. Outside of software she enjoys playing with fire, welding, and hula hooping.

Most recently, Andy Konwinski co-founded Databricks. Before that he was a PhD student and then postdoc in the AMPLab at UC Berkeley, focused on large scale distributed computing and cluster scheduling.

He co-created and is a committer on the Apache Mesos project. He also worked with systems engineers and researchers at Google on the design of Omega, their next generation cluster scheduling system. More recently, he developed and led the AMP Camp Big Data Bootcamps and first Spark Summit, and has been contributing to the Spark project.

Patrick Wendell is an engineer at Databricks as well as a Spark Committer and PMC member. In the Spark project, Patrick has acted as release manager for several Spark releases, including Spark 1.0. Patrick also maintains several subsystems of Spark's core engine. Before helping start Databricks, Patrick obtained an M.S. in Computer Science at UC Berkeley. His research focused on low latency scheduling for large scale analytics workloads. He holds a B.S.E in Computer Science from Princeton University

Matei Zaharia is the creator of Apache Spark and CTO at Databricks. He holds a PhD from UC Berkeley, where he started Spark as a research project. He now serves as its Vice President at Apache. Apart from Spark, he has made research and open source contributions to other projects in the cluster computing area, including Apache Hadoop (where he is a committer) and Apache Mesos (which he also helped start at Berkeley).
Read less
Price: Rs. 690   Rs.683
You save: Rs.7
Vendor : Sunidhi Ventures Inc., Mumbai
BUY NOW