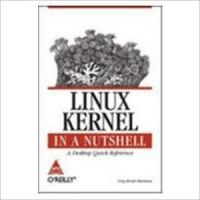 Other books by Greg Kroah- Hartman

Linux Kernel in a Nutshell

PC Hardware in a Nutshell: A...