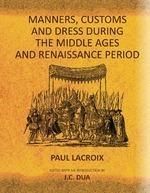 Manners Customs and Dress during the Middle Ages and Renaissance Period

Other books by Paul Lacroix