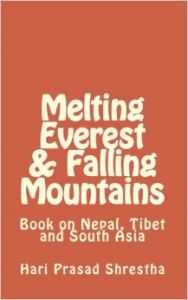 ISBN: 9789937228879    Publisher: Bhim Prasad Shrestha Memorial Trust, Jumla, Nepal Year of publishing: 2016
Mr. Hari Prasad Shrestha's book ' Melting Everest and falling Mountains ' is collection of events and issues of Nepal Tibet and South Asia. First article of book indicates seriousness of ice-melting caused...Read more
Mr. Hari Prasad Shrestha's book ' Melting Everest and falling Mountains ' is collection of events and issues of Nepal Tibet and South Asia. First article of book indicates seriousness of ice-melting caused by global warming. Furthermore every day thousands of cubic meters of sand boulder and aggregates are being exported from Nepal to India to build large infrastructures in India. These natural resources are removed from riverbeds riverbanks and also excavated from the ground near the foothills of the Chure hills. The removal of sand and boulders in Nepal can be seen in most of the rivers of southern Terai of Nepal. This exploitation work of natural resources is increasing in massive scale beyond the bearing capacity of the rivers and the hill slopes of Nepal. Major issues and realities been described in this book. The heart-touching depiction of Tibetan refugees and features of South Asian economy are other topics of interest to the readers. The back cover of the book says - Former Chief of Staff of the Indian Army Field Marshal Sam Manekshaw once famously said about Gurkhas: If a man says he is not afraid of dying he is either lying or he is a Gurkha. Nepal is considered to be the world's biggest museum. Nepal has always been considered as the holiest of the holy lands for the Hindu and the Buddhists. Still the Nepalese social structure indicates primordial characteristics if a man is born as Kami (blacksmith) he cannot be a Brahmin and Brahmin cannot be a Kami. This tiny country is bearing the influx of refugees. Tibetans are continuously crossing the risky Himalayan border to enter Nepal. Never-ending political transitional period has destabilized this nation. Power shortage has darkened the life of people and Nepal has lost its efficiency in implementing even small power projects to fulfill its internal power demands. Quota restriction and non-tariff barriers imposed by USA and India on major Nepalese production crumpled exports of Nepal and the whole economy became ailing after that intolerable fright. In the article article "Nation's Failure by Power Failure "the writer portrays that the cause root problem of the power sector in Nepal is due to instability and red- tapism and powerful vested interest group (water mafias). The never ending load-shedding has darkened the future of Nepali people. The world's second largest hydro power potential country has been among the lowest power producer of the world. The fine article the Risky Himalayan Crossings the author has marvelously explains about difficulties faced by the Tibetans who want to leave China through crossing the Himalayas hiding the eyes of Chinese security forces. He writes-There are equal chances of victory and disappointment. Many days they pass through lonely mountains even out of trail by the fear of being detained many times without food and water. If befall ailing en-route they have to carry on their journey in such condition too. Some time they snooze under open sky of snow and wind. An ordinary over and under aged person hardly can trek in that trails who are caught attempting to cross the border often face torture and varying periods of imprisonments. The writer believes that south Asia will be a leading region of the word economy. The article 'South Asia: The Emerging Region for Trade and Investment' portrays the good future of all the eight countries of south Asia.
Read less

Other books by Hari Prasad Shrestha

The Violent Nile- A Novella on...