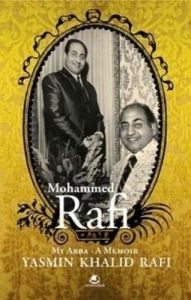 Famed music director Naushad Ali described Mohammed Rafi as Indias new Tansen. In a singing career spanning 35 years, Rafi...Read more
An intimate portrait of one of the best-loved singers the world has ever known.

Famed music director Naushad Ali described Mohammed Rafi as Indias new Tansen. In a singing career spanning 35 years, Rafi came to be regarded by many as the greatest playback singer the Hindi film industry has ever known. Apart from Naushad, Rafi worked with all the well- known music directors of his time, including S D Burman, Shankar-Jaikishen, Laxmikant-Pyarelal and O P Nayyar. One of his hallmarks was his ability to sing in a variety of styles, ranging from classical and patriotic songs to qawwalis, ghazals and bhajans, though he is best known for his romantic songs and duets. He became the voice of most of the actors across the decades including Dilip Kumar, Shammi Kapoor, Dev Anand, Dharmendra and Amitabh Bachchan. He also playbacked for superstar Rajesh Khanna on a few occasions including Gun guna rahen hain bhanware khil rahi hai kali kali and Baagon mein bahaar hai, kaliyon pe nikhaar hai in the film Aradhana. It was songs like these and countless others like Suhani Raat Dhal Chuki (Dulari), O Duniya ke Rakhwaley (Baiju Bawra), Yeh Zindagi ke Meley (Mela), Naseeb Dar pe Tere Azmaney Aaya Hoon (Deedar) and Shabaab pe mein zara si sharab phekoonga (Amar Akbar Anthony), that have made Mohammed Rafi live on in the hearts of millions long after he passed away in 1980. Yasmin Rafi grew up as a devoted fan of Mohammed Rafi, little knowing that she would one day meet and marry his son, Khalid. This transition from fan to family as she puts it, led to this heartwarming memoir of an artiste who was an icon for the world, but for his family, a simple, caring and loving man who delighted as much in good food, flying kites with his children, and driving his parrot-green Fiat through the streets of Mumbai, as he did in the numerous awards that came his way, including six Filmfare awards and the Padma Shri in 1967.

Other books by Yasmin Rafi