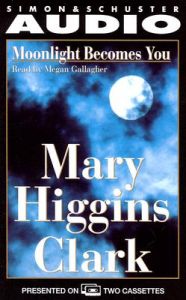 Set in Newport, Rhode Island, "Moonlight Becomes You" has as its center Maggie Holloway, an independent young woman who has put personal...Read more

A tale of brilliantly sustained terror from america's "queen of suspense"

Set in Newport, Rhode Island, "Moonlight Becomes You" has as its center Maggie Holloway, an independent young woman who has put personal tragedy behind her and become one of the fashion world's most successful photographers.

While accompanying her date to his family reunion, Maggie is reunited with a woman who had once been her stepmother. Nuala, now widowed, invites Maggie to visit her, but when Maggie arrives, she finds Nuala dead -- the victim of an apparently random break-in.

Maggie is stunned when she learns Nuala had changed her will, leaving her Victorian house to Maggie -- the only proviso that she occasionally visit her old friend Greta Shipley. When she accompanies Mrs. Shipley to the cemetery to visit Nuala's grave -- as well as those of other friends recently lost -- Maggie discovers that something is terribly wrong. Using her skills as a photographer to aid her in uncovering the secrets hidden on the gravesites, she realizes that these deaths may not have been random, but part of a diabolical scheme. What Maggie doesn't realize is that she too has become a target -- and each clue brings her closer to a shocking, unimaginable fate.

With the sense of swiftly mounting danger that has made all of Mary Higgins Clark's works major bestsellers, "Moonlight Becomes You" is enthralling suspense.
Read less

Other books by Mary Higgins Clark

Where Are the Children?

I'll be Seeing You

Weep No More, My Lady

All Through the Night

A Case of Need: Michael Crichton...