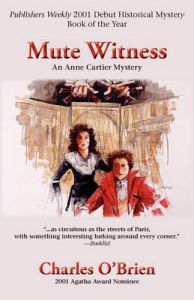 ISBN: 9781890208752    Publisher: Poisoned Pen Press Year of publishing: 2002     Format:  Paperback / softback No of Pages: 325 pp
Review:
On the eve of the French Revolution, Anne Cartier, a vaudeville actress in London, is told that her stepfather has killed his mistress and then himself in Paris. Refusing to believe the official...Read more
On the eve of the French Revolution, Anne Cartier, a vaudeville actress in London, is told that her stepfather has killed his mistress and then himself in Paris. Refusing to believe the official account, she enlists Colonel Paul de Saint-Martin of the royal highway patrol to uncover the truth. Through her new friendship with a deaf, illiterate seamstress with a talent for puppetry, she joins the Palais Royale, and from there is introduced to every decadent aspect of the French aristocracy. Somewhere in the darkness flit the answers, but Anne won't find them until she is tested to the limits of physical and emotional endurance. This book is a technical and elegant tour de force. Bravo, mademoiselle! --Jim Warren, The Mystery Bookstore Well, I just finished reading Charles O'Brien's Mute Witness and I'm happy to be in the company of those discovering a new great mystery writer. I'm hardly alone in this discovery -- Publishers Weekly gave it a glowing review, which can be seen on amazon.com., starting with the words: "The bar for historical mysteries has just been raised." Mute Witness is a historical novel taking place mainly in the Paris of 1785-6, with some of the early action occurring in London. It is of the suspense and intrigue sub-genres, but in my estimation also bridges a gap between mysteries and what are usually called mainstream novels. It pays commendable attention to detail and reminds me in that sense somewhat of Peter Lovesey's writings, but I also find in it a style and pacing reminiscent of Daphne du Maurier's books. The attention to detail I'm talking about is far above what one might expect to find in a historic mystery. O'Brien embroiders a richtapestry in his novel where almost every sentence appeals to the senses. He augments this with fine details about the time and place giving it a gripping feeling of authenticity, keeping the foreground action against a background with numerous examples of the art, furnishings, artifacts, architecture, mannerisms, and color of the historic setting. O'Brien himself, an academic historian, has an excellent background for this type of book, and for the artistic details he was aided by his wife, Elvy. Mute Witness has a strong feminine lead in Anne Cartier, supported by two worthy male principal characters, and opposed by more than two powerful villains. Although the reader is plunged into the action from the beginning, O'Brien constructs his story with an ever-increasing tempo and pitch leading up to a highly satisfying, long drawn out conclusion. This is not a mystery book to read and toss aside. One wants to keep it to re-read and re-savor, while hoping that Charles O'Brien will not stop with just this one success, but will continue to make more such elegant contributions of this type to the field of literature. This a a mystery with class. --Gene Stratton, DorothyL "The bar for historical mysteries has just been raised, thanks to Charles O'Brien's masterly debut novel Mute Witness. Set in late 18th-century London and France, this is the story of a young woman's search for the truth in a society where appearance is all. This is a truly wonderful first novel--elegantly written, complex in both its characters and its plotting, and wearing the author's scholarship and erudition lightly. O'Brien, a retired history professor, deserves a strong following both among mysteryreaders and readers of novels in the tradition of Charles Palliser. This is great stuff; please, may we have more?" --Publisher's Weekly The author's debut mystery, set at the end of the 18th century, swings between England and France and engulfs the reader in a world where the rights of the wealthy and the rights of men, far outweigh any sense of justice as we know it. And women such as Anne Cartier must use all their wits and wiles to endure - and find good fortune as well if they hope to emerge victorious. Anne is an actress, daughter of an actress and stepdaughter of an actor. Her mother dead and her stepfather living in Paris, Anne is earning her living in an English vaudeville theater. When Anne rejects the advances of a ruffian she soon finds herself violated more rudely by English justice than by her ill-bred suitor. Though saved from the worst fate planned for her, Anne is more than ready to leave the acting life. Opportunity presents itself when a former patron of her parents invites her to come to Paris. Unfortunately, the invitation also brings news of her stepfather's unfortunate suicide - a death that followed his murdering his mistress. Anne seizes the chance to leave England and to discover more about the fate of her stepfather. Driven by her need to uncover the truth about her stepfather's death, Anne plunges into a world of intrigue that despite her inexperience she is well-equipped to deal with. Anne's acting ability, the agility honed through acrobatics, even her knowledge of signing to communicate with the deaf - all come into play as she penetrates the ugly secrets masked by her stepfather's murder. O'Brien's debut draws heavily on hisknowledge of the period and provides a solid underpinning to a mystery that combines romance, intrigue and suspense in near equal measure. Anne Cartier's bravura first appearance is bound to leave readers applauding for an encore. --Bob Hahn, Copyright 1996 - 2000, BookBrowser
Read less

Other books by Charles O'Brien

Sherlock: The Hound of the...

Sherlock: The Memoirs of...