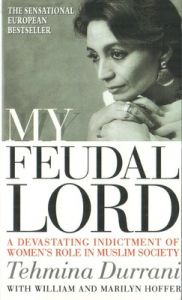 Other books by Tehmina Durrani

Daughter Of The East

I Am Malala: The Girl Who Stood...