Track Order Your Cart
Buy Books Online > Biography: arts & entertainment > On the Wings of Music: A Book of Journeys 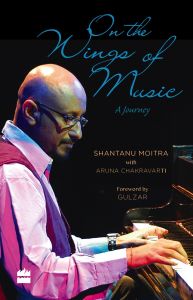 On the Wings of Music: A Book of Journeys

From a childhood spent...Read more
Once, in a school in Delhi, there was a young boy who loved nothing more than making music and dreamed of sharing his music with the world. One day, that dream became a reality.

From a childhood spent strumming away at a guitar in Delhi to professional success as a music composer in Mumbai, Shantanu Moitra has come a long way. Here, he gives us a glimpse into his world and the moments that have made him who he is. From his early days as a client servicing drone in an advertising agency to his collaborations with prominent musicians and film-makers, to the making of Parineeta, his greatest hit and from his all-consuming love for astronomy to near-death escapades in the Himalayas, he shares the most intimate parts of himself through his phenomenal adventures in this compelling memoir.