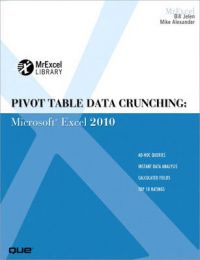 PivotTables may be Excel's most powerful feature, but Microsoft has estimated that only 15% of Excel users take advantage of them. That's because PivotTables (and their companion feature, PivotCharts)...Read more

PivotTables may be Excel's most powerful feature, but Microsoft has estimated that only 15% of Excel users take advantage of them. That's because PivotTables (and their companion feature, PivotCharts) have a reputation for being difficult to learn. Not any more! In this book, Excel legends Bill Jelen ("MrExcel") and Michael Alexander teach PivotTables and PivotCharts step-by-step, using realistic business scenarios that any Excel user can intuitively understand. Jelen and Alexander go far beyond merely explaining PivotTables and PivotCharts: they present practical "recipes" for solving a wide range of business problems. Drawing on more than 30 combined years of Excel experience, they provide tips and tricks you won't find anywhere else, and show exactly how to sidestep common mistakes.
Coverage includes: " Creating PivotTables, customizing them, and changing the way you view them " Performing calculations within PivotTables " Using PivotCharts and other visualizations " Analyzing multiple data sources with PivotTables " Sharing PivotTables with others " Working with and analyzing OLAP data " Making the most of Excel 2010's powerful new PowerPivot feature " Using Excel 2010's Slicer to dynamically filter PivotTables " Enhancing PivotTables with macros and VBA code This book is part of the new MrExcel Library series, edited by Bill Jelen, world-renowned Excel expert and host of the enormously popular Excel help site, MrExcel.com.

Other books by Bill Jelen