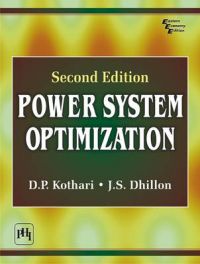 This book is intended to meet the needs of a diverse range of groups interested in the application of optimization techniques to power system operation. It requires only an elementary knowledge of numerical techniques and matrix operation to understand most of the topics. It is designed to serve as a textbook for postgraduate electrical engineering students, as well as a reference for faculty, researchers, and power engineers interested in the use of optimization as a tool for reliable and secure economic operation of power systems.

About the author: Dhillon Kothari

Dr. Kothari is also a Fellow of the Indian National Academy of Engineering (FNAE), Fellow of Indian National Academy of Science (FNASc.), Fellow of Institution of Engineers (FIE), and Fellow of Institute of Electrical and Electronics Engineers (IEEE). His fields of specialisation include Optimal Hydro-thermal Scheduling, Unit Commitment, Maintenance Scheduling, Energy Conservation, and Power Quality and Energy Systems Planning and Modelling. He has contributed extensively to these areas, guided 30 PhDs, 63 MTechs, authored 25 books in power systems and published 700 research papers in various national and international journals/conferences. He is also the recipient of the Life Time Achievement Award (2009) by the World Management Congress, New Delhi, for his contribution in the areas of educational planning and administration.

Other books by Dhillon Kothari