Track Order Your Cart
Buy Books Online > Mechanics of solids > Principles of Hyperplasticity: An Approach to Plasticity Theory Based on Thermodynamic Principles 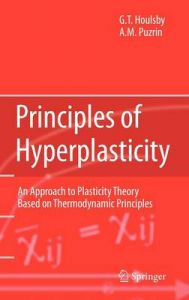 Principles of Hyperplasticity: An Approach to Plasticity Theory Based on Thermodynamic Principles

Other books by Guy T. Houlsby (University of Oxford, UK)

Mechanisms and Mechanics of...