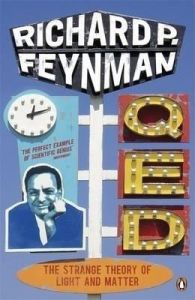 Summary of The Book


In 1965, Richard P. Feynman...Read more
In QED: The Strange Theory Of Light And Matter, Richard P Feynman explains his groundbreaking concept of Quantum Electrodynamics in an extremely simple way.

Summary of The Book


In 1965, Richard P. Feynman received the Nobel Prize in Physics for his theory of Quantum Electrodynamics. QED: The Strange Theory Of Light And Matter is an easy explication of his novel theory. It was born out of lectures that Feynman gave on the subject at the University of California in 1983 for the general public.


QED: The Strange Theory Of Light And Matter sounds like it would be full of complex equations and extremely difficult to read. On the contrary, Feynman avoids complex equations, uses everyday examples to explain complex theories of Quantum Electrodynamics and encourages a conceptual understanding of his theory.


The book is comprised of four lectures. In the first, Feynman describes the properties of photons, the particles that light is composed of. In the second lecture, he describes the way photons behave while undergoing reflection and diffraction. The third lecture describes Quantum phenomena such as transmission and reflection. It also introduces readers to the simple method that Feynman devised to diagrammatize complex quantum phenomena called the Feynman Diagrams. In the fourth lecture, Feynman explains the meaning of Quantum Electrodynamics and discusses some of its limitations.

QED: The Strange Theory Of Light And Matter enables the lay reader to understand the complex theory of Quantum Electrodynamics and how this theory can explain everyday phenomena such as the reflection of oneÃ¢â¬â ¢s face in a mirror or the appearance of colors when oil spills over water.


The writing of the book is simple and easy to read. There are no complex mathematical equations or difficult formulas of physics. All complex theories are explained in the simplest way possible to facilitate its understanding by all kinds of people.

QED: The Strange Theory Of Light And Matter enables the common reader to understand the mysteries of the world around him or her by means of FeynmanÃ¢â¬â ¢s theory of Quantum Electrodynamics.


Richard P. Feynman was a celebrated American Theoretical Physicist who won the Nobel Prize in Physics for his groundbreaking work on Quantum Electrodynamics.


His books include Surely You're Joking Mr. Feynman, What Do You Care What Other People Think?, Six Easy Pieces: Essentials of Physics Explained by Its Most Brilliant Teacher, Six Not So Easy Pieces: Einstein's Relativity, Symmetry and Space-Time, and The Pleasure of Finding Things Out: The Best Short Works of Richard P. Feynman.


Feynman was born in Manhattan in 1918, and was part of the team that developed the atomic bomb used in World War II. Richard P. Feynman had tried to popularize and simplify physics all throughout his lifetime. He was labelled as one of the ten greatest physicists of all time by the British journal Physics World in 1999. The Feynman Lectures on Physics is a collection of his illuminating lectures at Caltech University. A number of recordings of his lectures are also available.
Read less

Other books by Richard Feynman

Exercises for the Feynman...