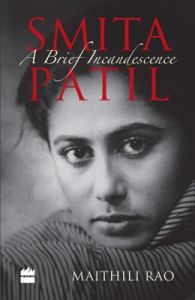 Smita Patil: A Brief Incandescence tells her remarkable story, tracing it from her childhood to stardom, controversial marriage and untimely death. Her close friends remember 'Smi' as outspoken and bindaas, not beyond hurling abuses or taking off on bikes on impromptu joyrides. Film-makers like Shyam Benegal and Jabbar Patel, or co-stars Om Puri and Shabana Azmi, talk about Patil's dedication to her craft and her intuitive pursuit of that perfect take. From the difficult equation she shared with her mother, and her propensity for 'wrong' relationships, about which she was always open unlike other stars of the time, this is a complex and honest exploration of Patil's life.

The book also includes a sharp critique of the films that defined they read like a roster of the best of New Indian Cinema: Bhumika, Mandi, Manthan, Umbartha, Bhavni Bhavai, Akaler Sandhane, Chakra, Chidambaram, Mirch Masala among them. Maithili Rao also studies Patil's many unfortunate forays into mainstream commercial cinema.

Going to the Movies: A Personal...