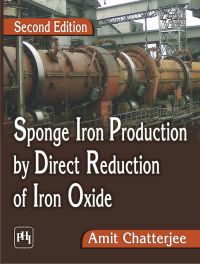 The book is primarily intended for the undergraduate and postgraduate students of metallurgical engineering. It is also a must-read for researchers, technologists and process metallurgists engaged in the rapidly developing field of direct reduction of iron oxides, which is of critical importance for India and other developing nations that are beginning to play a major role in global steelmaking.

Dr. Chatterjee has authored several books: Ironmaking and Steelmaking--Theory and Practice and Sponge Iron Production by Direct Reduction of Iron Oxide (both published by PHI Learning, Delhi) as well as two other books entitled Beyond the Blast Furnace and Metallics for Steelmaking--Production and Use, besides a number of Monographs on Cokemaking, Sintermaking, Ironmaking, Continuous Casting, etc.

Dr. Chatterjee is recognised all over the world as an authority in the field of process metallurgy, particularly in the area of alternative method of iron production comprising direct reduction and smelting reduction, in both of which hot metal is produced without using coke.

Other books by CHATTERJEE AMIT

FUNDAMENTALS OF NAVIGATION AND...