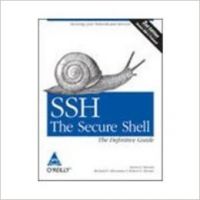 Other books by Barrett

The Shape of Thought: How Mental...

The Gospel According to St....

The Management of Network Security