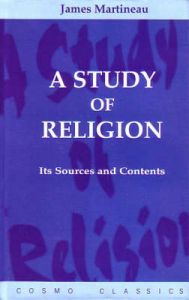 Study of Religion. Its Sources and Contents. 2 Volumes Set

Other books by James Martineau

Study of Religion. Its Sources...

The Law Of Duty: A Suggested...

Types of Ethical Theory: Volume I

The Nature And Genesis of...

The Future of God: A practical...

God in the Lab: How Science...

Philosophy of the Bhagvad Gita....