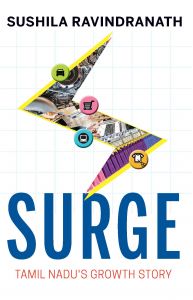 Fast-forward to 2016. Kolkata is not on the business radar
at all. Mumbai and Delhi continue to remain powerhouses.
In the South, Bangalore is on top of everyone's list, and
even Hyderabad is seen as a dynamic centre of growth.
A little-known fact though, is that Chennai is the base for
more industries than either of those two cities.

Tamil Nadu's industrial growth has to be one of India's
best-kept secrets. For various reasons -- Tamil Nadu's
distance from Delhi, the centre's lack of interest because
of the dominance of regional parties, the companies not
rushing to the stock market unlike their Western and
Northern counterparts -- Tamil Nadu is not perceived
as an industrially-advanced state. Surge seeks to undo that
misconception. Examining both old-economy and neweconomy
industries, profiling scions of well-established
families as well as young upstarts, homegrown talent and
those who came in from outside the state, this book fills
an important niche in the story of Indian industrialisation.

Other books by SUSHILA RAVINDRANATH

The Role of Regional Political...