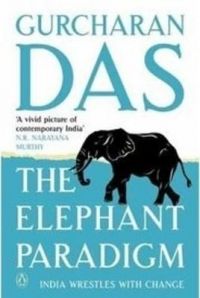 ISBN: 9780143419266    Publisher: PENGUIN INDIA Year of publishing: 2012     Format:  Paperback Language: English
The Elephant Paradigm: India Wrestles With Change is a book that captures the joys and disappointments of India post-liberalization, when it shifted from closed to an open economy.

The...Read more
The Elephant Paradigm: India Wrestles With Change is a book that captures the joys and disappointments of India post-liberalization, when it shifted from closed to an open economy.

The Elephant Paradigm: India Wrestles With Change is public intellectual Gurcharan Das musings on Indias awakening from an ancient civilization dipped in antiquity to the potential and spirit of the youth. It follows on the heels of Das India Unbound: From Independence to the Global Information Age, which talks about the transformation of the Indian economy from open to closed in the 1990s, but covers a whole range of subjects, from national competitiveness, panchayati raj, and the concerns, both philosophical and sacred, of the common man of India after the country entered the age of liberation, as the author calls it.


The title mentions the elephant in the Indian context to distinguish it from the tigers of Asia. While the Asian tigers may roar ahead, India will be similar in its movements and mannerisms to the wise elephant, which walks surely and steadily. Like the elephant, India will move ahead, but will take its time to measure and reflect upon its journey.


Indias transformation post-90s was remarkable and had multiple facets to it. The author uses the essay form to string together many of these varied facets to form a single thread of historic transition.

The Elephant Paradigm: India Wrestles With Change is divided into three sections. To begin with, the readers will be introduced to the context under which the changes occurred. Then, the readers are shown glimpses of the changes that occurred in both private and public lives, as well as the changes that didnt come about. And as the reader is taken along on a journey of the major economic, political, and social developments, they are reminded of the individual aspirations and beliefs that grounded the process. With a combination of wit and insight, Gurcharan Das presents to its readers the new India.


Gurcharan Das is an author, public intellectual, and commenter.

India Unbound: From Independence to the Global Information Age, The Difficulty of Being Good: On the Subtle Art of Dharma, India Grows at Night: A Liberal Case for a Strong State, and A Fine Family are among the books hes written.


Gurcharan Das was born in the year 1943 in Lyallpur, India, which is now in Pakistan. His family fled to India as refugees post-independence. He graduated from Harvard University with honors in philosophy and attended the Advanced Management Program at Harvard Business School. Das joined Richardson Hindustan Ltd as a trainee and in a span of 4 years became the chairman and managing director. He then joined Procter & Gamble, where he was, at different times, the CEO and Vice President. After a 30-year career, Das retired and began writing full-time. He has written for several prominent media houses, such as The New York Times, The Times of India, Newsweek, TIME, The Wall Street Journal, and Foreign Affairs.
Read less

Other books by Gurcharan Das

A Fine Family : A Novel (English)

NEW SONGS OF THE SURVIVORS

The Mystery of the Rose The...