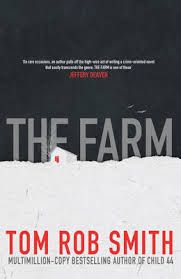 Other books by Tom Rob Smith

The thousand faces of night

The Signature of All Things

The Art of Hearing Heartbeats...