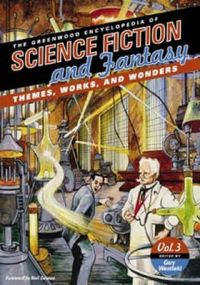 The Greenwood Encyclopedia of Science Fiction and Fantasy: Themes, Works and Wonders

Works of science fiction and fantasy are enormously popular among students and general readers. The combined effort of some 150 expert contributors--including Richard Bleiler, John Clute, Ian Nichols, and Darrell Schweitzer--this encyclopedia discusses pervasive themes in science fiction and fantasy and gives detailed attention to selected novels, films, and television series. The first two volumes provide 400 alphabetically arranged entries on individual themes, while the last volume includes alphabetically arranged entries on 200 particular works. Accessible to a wide range of audiences, this encyclopedia is destined to be a favorite resource for anyone interested in fantasy and science fiction. While other references provide relatively brief entries, or offer essays on a limited group of writers, this encyclopedia gives extensive treatment to the most important themes and works of science fiction and fantasy across a range of media.

Gary Westfahl, and internationally recognized authority on science fiction and fantasy, has coordinated the effort of some 150 expert contributors. In addition, the project was shaped by an advisory board of some of the most distinguished names in the field, including: Richard Bleiler; John Clute; Fiona Kelleghan; David Langford; Andy Sawyer; And Darrell Schweitzer.

Canonical works of science fiction and fantasy are central to the curriculum, while more popular works are being taught with greater frequency and often appear on summer reading lists. The format of this encyclopedia makes it an essential tool for students writing thematic essays, and teachers will also value it as guide for planning lessons. In addition to high school libraries, public libraries supporting student research or book discussion groups will welcome the lucid, thoughtful essays in this encyclopedia.
Read less

Anatomy of the unknown existence...

Empire of the Gods: Is the Truth...

Hard-boiled Wonderland and the...