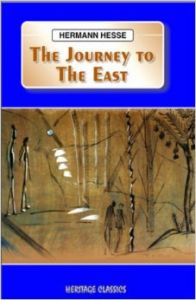 THE JOURNEY TO THE EAST (English) (Paperback)

Other books by HERMANN HESSE