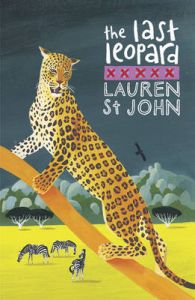 Other books by Lauren St.John

The Giraffe and the Pelly and Me...

Charlie and the Chocolate...