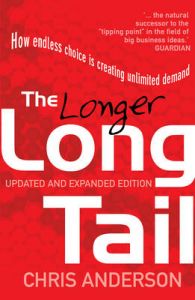 The Long Tail: How Endless Choice is Creating Unlimited Demand

Other books by Chris Anderson