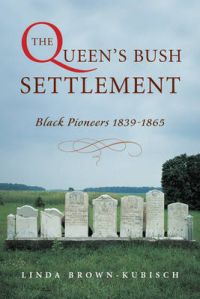 Linda Brown-Kubisch became interested in the Queen's Bush settlement while employed at the Kitchener Public Library in Kitchener, Ontario. The staff... Read more

Linda Brown-Kubisch became interested in the Queen's Bush settlement while employed at the Kitchener Public Library in Kitchener, Ontario. The staff of the library's Grace Schmidt Room of Local History frequently received queries about this community's inhabitants. Realizing that virtually nothing was known about the settlement, she began to search for information from a wide variety of sources - a process that would take several years to complete.

Following her employment in Kitchener from 1987 to 1992, she moved to the United States, where she received a master's degree in history from the University of Missouri-Columbia, and then worked for a number of years as a reference specialist for the State Historical Society of Missouri. Linda wrote numerous historical and genealogical articles for both Canadian and American journals and published an entry in Organizing Black America: An Encyclopedia of African American Associations (New York: Garland Publishing, Inc.).

Most recently, Linda lived with her family in Covington, Louisiana, a small town north of New Orleans, and was employed as the genealogy specialist for the St. Tammany Parish Public Library. Linda Brown-Kubisch died at her home on December 20, 2003, after a courageous battle with cancer.
Read less

Memoir of James Jackson: The...

Challenging the Boundaries of...

Making Peace with Cochise: The...