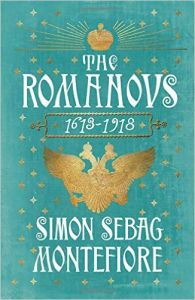 ISBN: 9780297852667    Publisher: Orion Publishing Group Year of publishing: 2016     No of Pages: 406
â¢ Simon Sebag Montefiore's much-anticipated first new history book since the phenomenal international success of Jerusalem (a no. 1 bestseller over 300k copies sold) â¢ Praise for Jerusalem:...Read more
â¢ Simon Sebag Montefiore's much-anticipated first new history book since the phenomenal international success of Jerusalem (a no. 1 bestseller over 300k copies sold) â¢ Praise for Jerusalem: 'Vast and dazzling ... utterly compelling from start to finish' -- Sunday Times â¢ 'Montefiore has a great novelist's eye for human detail a great journalist's nose for human frailty and a great historian's touch when it comes to selecting just the right primary source to bring the past alive. ... Judicious nuanced balanced and sensitive ... When history is written this way one can never have too much' -- The Times â¢ 'Read the book from cover to cover. There is never a dull page' -- Daily Telegraph â¢ 'Already a classic - a gripping and thought-provoking study' -- Financial Times â¢ Based on extensive new archival research including a radically new portrayal of the last tsar Nicholas II and his family â¢ This is a story with timely resonance for own times: the Romanovs left an indelible imprint on Russia which finds powerful echoes in Putin's Russia today. The Romanovs were the most successful dynasty of modern times ruling a sixth of the world's surface. How did one family turn a war-ruined principality into the world's greatest empire? And how did they lose it all? This is the intimate story of twenty tsars and tsarinas some touched by genius some by madness but all inspired by holy autocracy and imperial ambition. Montefiore's gripping chronicle reveals their secret world of unlimited power and ruthless empire-building overshadowed by palace conspiracy family rivalries sexual decadence and wild extravagance and peopled by a cast of adventurers courtesans revolutionaries and poets from Ivan the Terrible to Tolstoy from Queen Victoria to Lenin. To rule Russia was both imperial-sacred mission and poisoned chalice: six tsars were murdered and all the Romanovs lived under constant threat to their lives. Peter the Great tortured his own son to death while making Russia an empire and dominated his court with a dining club notable for compulsory drunkenness naked dwarfs and fancy dress. Catherine the Great overthrew her own husband - who was murdered soon afterwards - loved her young male favourites conquered Ukraine and fascinated Europe. Paul was strangled by courtiers backed by his own son Alexander I who faced Napoleon's invasion and the burning of Moscow then went on to take Paris. Alexander II liberated the serfs survived five assassination attempts and wrote perhaps the most explicit love letters ever written by a ruler. The Romanovs climaxes with a fresh unforgettable portrayal of Nicholas and Alexandra the rise and murder of Rasputin war and revolution - and the harrowing massacre of the entire family. Written with dazzling literary flair drawing on new archival research The Romanovs is at once an enthralling story of triumph and tragedy love and death a universal study of power and an essential portrait of the empire that still defines Russia today.
Read less

Other books by Simon Sebag Montefiore

Speeches that changed the world...

Five Children on the Western Front

The Stone of Fire (English)...