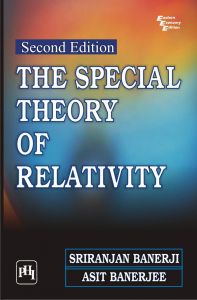 This text is designed to give students a solid foundation in experimental background of the theory, relativistic kinematics, relativistic dynamics, and relativistic electrodynamics. What distinguishes the text are some special features, not found in other similar texts, that give a more intuitive understanding of the subject. Another important feature of the text is its clarity and correctness with which the principles, their relations, and their applications are set forth.

This well-accepted book, now in its second edition, includes a brief account of the "properties of Cartesian tensors" and also adds "experimental verifications of the mass variation of a particle with velocity and the mass-energy equivalence relation" in Chapter 3. Besides, in Chapter 4, some calculations to show how the potentials obtained for a uniformly moving charge lead to Lorentz transformation have been added. It also includes some new problems in the exercise section of Chapters 2, 3 and 4 with their solutions given in the Appendix.

The book will also be useful for competitive examinations to PG and Ph.D. courses.

Presents the covariant four-dimensional formulation of relativistic mechanics and electrodynamics.

Explains the Lagrangian and Hamiltonian formulations in mechanics and electrodynamics.

Describes the Terrell effect (visual appearance of moving objects) and the Thomas precession.

Other books by Sriranjan Banerji

A Briefer History of Time...

A Brief History Of Time...

A Textbook of Applied Physics...