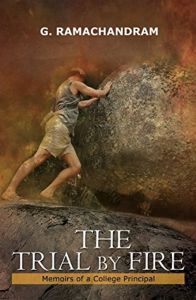 THE TRIAL BY FIRE : MEMOIRS OF A COLLEGE PRINCIPAL

The autobiography is in four parts.

Part I- Blissful ignorance- narrates the life of a rustic village boy and how he transformed.
Part II- Awakening- is about the author's struggle to find meaning and purpose for existence and becoming a teacher by accident.

Part III- Rise- is regarding his appointment as the Principal, the conspiracy to scuttle the appointment and his legal battles.

Part IV-Turbulence- is about his uninterrupted nerve-racking duel with multiple authorities to reinstate the truth and justice and protect the institution of Principal. And by taking a high moral ground and displaying mental toughness, he weathered a turbulent period of calculated verbal assaults aimed at making him dispirited and crippled.

This is the first time that such an autobiography is penned by the Head of any educational institution, giving a gripping account of his torrid times. The book makes an interesting and inspirational reading. It is rich, engaging and very truthful. The heads of educational institutions, particularly the future generation of academic administrators will profit by the book.
Read less
About the author: G. Ramachandram
DR.G.RAMACHANDRAM; moulded in the Nehruvian and the Gandhian ideals and values, is a man of deep convictions and impeccable personal integrity. He holds... Read more
DR.G.RAMACHANDRAM; moulded in the Nehruvian and the Gandhian ideals and values, is a man of deep convictions and impeccable personal integrity. He holds a first class Master's Degree in Political Science from the University of Bombay. A student of Jawaharlal Nehru, he was awarded a PhD Degree by the University of Bombay for his thesis: 'Jawaharlal Nehru: His contribution to world peace'. It was the first time that any scholar undertook a full-fledged research on Pandit Nehru, covering the entire period of his Prime Ministership, for a comprehensive assessment of his impact on the world. His research work was published as a book, 'Nehru and World Peace'. He also has to his credit the book, 'Quaid-e-Azam: Muhammad Ali Jinnah', a translation of biographical novel 'Pratinayak', based on the life of founder of Pakistan. A Professor of Political Science, he has a distinguished teaching career spanning over three decades. He has to his credit around 135 research papers and articles published in leading journals and newspapers. He participated in more than 140 state, national and international seminars and conferences and presented papers on issues ranging from academic, administrative to socio-economic and political. As the first Principal of the Kandivali Education Society's College, Mumbai (NAAC accredited 'A' Grade) - a state aided Institution affiliated to the University of Mumbai- for eighteen long years, he laid its ethical foundation and nurtured and guided the College with far-sighted vision, exceptional courage and integrity and turned it into a first-rate institution in the city, especially in terms of academic standards and discipline. He is an expert on College administration and campus discipline. He is a resource person for the Executive Development Programme (EDP) for College Principals. He has been the Founder Secretary, Association of Indian College Principals- the first registered national organization of its kind in India. He was also elected unopposed as its President for a term of three years. Presently, he is the Convener of its Board of Trustees. Retired in 2009, he is now a RTI activist and conducts workshops and seminars on the RTI. He has been a crusader against corruption in public life. Currently, he is also a freelance writer and contributes regularly to newspapers. He is known for speaking his mind without fear. A long colleague and friend said to him, "You speak what you mean and mean what you speak. This is true academic freedom." -------- He can be contacted at: g_ramachandram@yahoo.com
Read less

The Autobiography of Benjamin...

Wings of Fire: An Autobiography...

Malala: The Girl Who Stood Up...