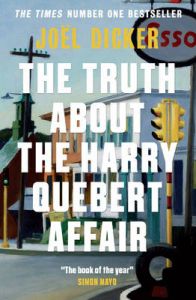 The Truth About the Harry Quebert Affair

Colorless Tsukuru Tazaki and His...