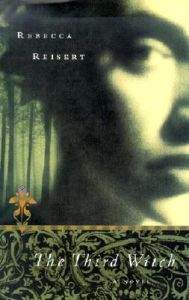 Rebecca Reisert's mesmerizing first novel re-imagines "Macbeth, Shakespeare's classic tragedy of power and madness, through the eyes of a mysterious young woman on a dangerous quest for vengeance.

But Gilly is haunted by recollections of a much brighter life. She clings to fading memories of a time when she was contented and adored -- until tragedy swept all that happiness away and young Gilly's life was changed forever.

"I have made my life an arrow, and His heart is my home. I have made my heart a blade, and His heart is my sheath....Obsessed with avenging her loss and putting out the fire that still rages in her heart, Gilly has dedicated herself to destroying Macbeth, the boundlessly ambitious man who took away her childhood, and his goading wife. Disguising herself as a poor servant boy, she insinuates herself into their lives and, as she bears horrified witness to Macbeth's violent path to power, Gilly subtly begins to take a hand in the forces governing his fate. But as the culmination of her revenge draws near, Gilly finds her own life at risk when she confrontsthe troubling legacy of a long-concealed heritage.

"The Third Witch is a brilliantly imagined, wonderfully satisfying novel. In a riveting story of ruthlessness and revenge, debut author Rebecca Reisert demonstrates a profound understanding of the Bard's timeless drama -- and of the real-life Macbeth upon whom Shakespeare's incarnation is modeled.
Read less

Nova and Quinton: No Regrets

The Hallowed Isle: The Book of...