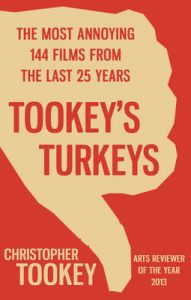 Tookey's Turkeys: The Most Annoying 144 Films from the Last 25 Years

Other books by Christopher Tookey