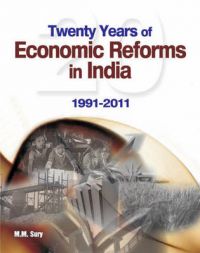 ISBN: 9788177082821    Publisher: New Century Publications Year of publishing: 2011     Format:  Hardback No of Pages: 774        Language: English
Development pattern of India during the first three decades (1950-80) after attaining Independence in 1947 was characterised by strong centralised planning, government ownership of basic and key industries,...Read more
Development pattern of India during the first three decades (1950-80) after attaining Independence in 1947 was characterised by strong centralised planning, government ownership of basic and key industries, excessive regulation and control of private enterprise, trade protectionism - through tariff and non-tariff barriers - and a cautious and selective approach towards foreign capital. It was a quota, permit and license regime all the way, guided and controlled by a bureaucracy trained in colonial style. This so-called inward-looking, import substitution strategy of economic development began to be widely questioned with the beginning of 1980s. Policy makers started realising the drawbacks of this strategy which inhibited competitiveness and efficiency and produced a much lower rate of growth than expected. After assuming power at the Centre, the Government of Prime Minister Rajiv Gandhi introduced a series of measures - through 1985 Industrial Policy - to reduce control on industries, particularly large ones. These measures, described as New Economic Policy, coincided with the policy framework of the Seventh Five Year Plan (1985-90).
The process of economic reforms initiated in 1985 got a big boost when the Government of Prime Minister P V Narasimha Rao announced a new industrial policy in the Indian Parliament on July 24, 1991. The new policy introduced radical changes "to unshackle the Indian industrial economy from the cobwebs of unnecessary bureaucratic controls". The new policy was widely welcomed for ensuring competitive and market economy in place of the outmoded command and controlled economy. Many saw it as a reversal of the 1956 Industrial Policy Resolution. After the reforms, the Indian economy has been growing faster than its historical growth rate. Tenth Five Year Plan (2002-07) recorded annual growth rate of 7.2 per cent and the underway Eleventh Five Year Plan (2007-12) aims to achieve 9.0 per cent growth rate per annum. On the flip side, India's high growth rate is all very well but its moral virtues - in terms of equity and environment - are falling by the wayside. In other words, the growth process must be made as inclusive and as environment-friendly as possible. Of late, Government has become complacent in introducing further reforms.
Opening up retail sector to foreigners, implementation of infrastructure projects, flexible labour laws and implementation of National Level Goods and Services Tax (GST) are some of the key reform measures being awaited keenly. This book provides a comprehensive account and assessment of reform measures introduced in various sectors of the Indian economy during the last 20 years (1991-2011). The sectors covered include agriculture, rural development, industry, minerals, infrastructure, energy, fiscal policy, monetary policy, credit management, financial institutions, financial markets, financial instruments, labour laws, employment generation, health, education, empowerment of disadvantaged and vulnerable groups, environment, disaster management, climate change, foreign trade, foreign debt/aid and foreign investment.
Read less

Control of Population Growth in...