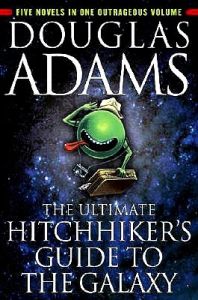 ULTIMATE HITCHHIKERS GUIDE TO THE GALAXY


Summary Of The Book

The books in the collection detail the adventures of five main characters, the first of them being an Englishman named Arthur Dent. He is the only survivor after the destruction of Planet Earth by the alien race of Vogons. The remaining four characters include an alien named Ford Prefect, a depressed robot called Marvin the Paranoid Android, FordÃ¢â¬â ¢s cousin Zaphod Beeblebrox, and a woman named Trillian.

In The HitchhikerÃ¢â¬â ¢s Guide To The Galaxy, the first book in the collection, the characters visit Magrathea, where they learn that a computer named Deep Thought made a prediction regarding a certain important question. This leads a couple of super-intelligent beings to formulate a secret plan of action to dissect ArthurÃ¢â¬â ¢s brain. The protagonists are forced to make a decision - the decision to escape.

In the second book, The Restaurant At The End Of The Universe, Zaphod discovers that he is part of a conspiracy to find out who actually runs the universe. Meanwhile, Arthur and Ford find themselves stranded on prehistoric Earth.

In the third book, Life, The Universe And Everything, Arthur and Ford encounter a character named Slartibartfast, who requests them to help prevent a galactic war to avoid the destruction of life in the universe.

In So Long, And Thanks For All The Fish, Arthur returns to his home planet Earth and falls in love with a girl name Fenchurch. He also discovers that Earth is but a replacement provided by the dolphins as part of their Ã¢â¬ËSave The HumansÃ¢â¬â ¢ campaign.

In the fifth book titled Mostly Harmless, the Vogons complete the task of obliterating the earth. Meanwhile Arthur, after the sudden loss of Fenchurch, settles happily in a small village on the planet Lamuella.

Young Zaphod Plays It Safe, the short story included in this collection, is a prequel to The HitchhikerÃ¢â¬â ¢s Guide To The Galaxy. In this story, Zaphod discovers a crashed spaceship that once housed something dangerous - something that has now escaped.


The Ultimate HitchhikerÃ¢â¬â ¢s Guide To The Galaxy was released in 2002 by Random House Publishing Group. The books in the collection have done phenomenally well as standalone novels. The short story has never been released as a standalone work.


Douglas Adams was an English author, dramatist, and humorist.

Adams wrote everything from novels to television scripts and short stories. His literary works include The Private Life Of Genghis Khan, Life the Universe and Everything, The Salmon Of Doubt, Young Zaphod Plays It Safe, and Doctor Who: Shada.

He wrote fiction as well as non-fiction. His writing mainly revolved around the universe, science, and technology. It was highly influenced by bands like Procol Harum, Pink Floyd, and The Beatles.

Adams was born on March 11, 1952, in Cambridge, England. He attended the Primrose Hill Primary School, and later Brentwood School. In 1974, he graduated with a BA in Literature from St JohnÃ¢â¬â ¢s College, Cambridge University. He took up a variety of odd jobs before creating The HitchhikerÃ¢â¬â ¢s Guide To The Galaxy, the work that brought him much success. It initially started out as a radio series before being adapted into a novel. Adams was known for his radical atheism, love of technological innovations, and advocacy of conservation and environmentalism. Adams was married to Jane Belson and the couple had a daughter named Polly Jane Rocket Adams. He succumbed to a heart attack on May 11, 2001.
Read less

Other books by Douglas Adams

Life, the Universe and Everything

The Restaurant at the End of the...

The Dilbert Future: Thriving on...

How to be a Woman