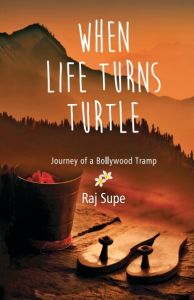 WHEN LIFE TURNS TURTLE Journey Of A bollywood Tramp

Indraneel is a young and successful film-maker, an alumnus of Massachusetts Institute of Technology....Read more
Raj Supe's fluent narrative and genuine search for truth will bring him many readers.~ Ruskin Bond

Indraneel is a young and successful film-maker, an alumnus of Massachusetts Institute of Technology. In an intoxicating relationship with a young and beautiful aspiring actress, his next film is being hailed as a blockbuster. Things couldn't be going any better. Suddenly, without warning, Indraneel's life overturns. Hurt floods his heart and soul, seemingly beyond redemption...

He arrives in Rishikesh, a mountain town by the river. The artist within him, as well as the bruised individual, senses the timeless love and solace emanating from the Ganga and the Himalayas, but innumerable whys continue to invade his thoughts. Introduced to Shaman, a bookseller with a difference, and a 'closet guru', the deeply sceptical Indraneel is introduced to a bewilderingly new, yet strangely magnetic world of spiritual seeking.

As the seasons pass, as pass they will...Indraneel gradually opens his mind to what he finds around him, delving step by step into the truth about spirituality and human existence. A measure of peace finally descends on his tormented mind.

But the world beckons yet again and Indraneel stands at a crossroads once more. He is asked to make a difficult choice. Will he submit to the strong current of spirituality now flowing within him? Does a spiritual life mean giving up everything else? Can he ever go back to the world? Will he find the happiness he so desperately seeks?

Other books by Raj Supe

Pilgrim Of The Sky

Maya In search of Tantric father

When Monday was over

And then, she said yes!